At the Beam Festival in June I joined a group of people in building one of Tom Bug’s brilliant Workshop Oscillator Machines in one of the workshop sessions. 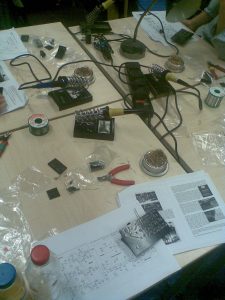 Even though the WOM is a simple design it can make some complex and sometimes chaotic sounds. It includes some circuit bending tricks including ‘power starvation’. This causes the part of the circuit that creates the basic elements of the sound, the oscillators, to enter unexpected cycling patterns when they struggle to work as normal as their power is gradually sucked away. With power starvation switched on – just a slight twist of one of the WOMs controls… a completely new sound is created. Playing the WOM is noisy harsh unpredictable fun.

The contacts at the bottom of the WOM look a bit like a deranged piano keyboard. They’re actually electrical contacts which you touch to become part of the circuit to bend its function.